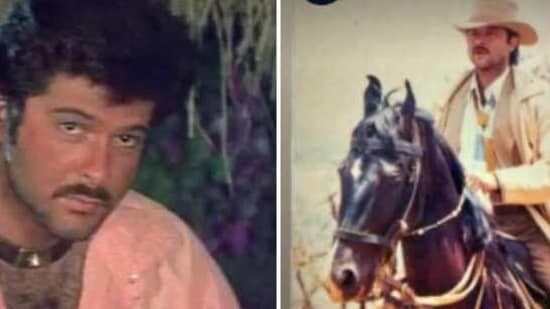 Anil Kapoor took to Instagram to share a collage of his own ‘then and now’ picture to speak of how times have changed. He is in Rajasthan for a shoot.

Actor Anil Kapoor on Thursday shared a ‘then and now’ collage of himself, showing the passage of time. Though he joked about the horse in the picture remaining the same as before, clearly it was he who drew attention.

In both the pictures, Anil is seen riding a horse, though the photos are decades apart. And yet, Anil looks fit as ever. While in the previous picture, he looks lean and fit, in the current one, Anil is all bulked up.

Sharing the picture, Anil wrote: “How the times have changed but the horse remains the same.”

Anil is currently in Narlai, Rajasthan for the shoot, possibly of an upcoming film. Sharing pictures from location, Anil wrote on Wednesday: “Had a great shoot day in Rajasthan…Feeling on top of the world..” The pictures showed Anil, atop a structure, looking down at the countryside. The actor looked fit.

Many of his friends from the industry commented on it. Shilpa Shetty wrote: “And you are looking sooo great too @anilskapoor.” Fatima Sana Shaikh dropped a bunch of red heart emojis. Daughter Rhea wrote: “Miss you.”

Anil saw the release of his film AK vs AK recently on Netflix. Writing about it, the Hindustan Times review said: “Directed by Vikramaditya Motwane and starring Anil Kapoor and Anurag Kashyap as exaggerated versions of themselves, AK vs AK is a gonzo romp that isn’t afraid of biting the hand that feeds. The film industry, it suggests, devotes more time to creating false idols than memorable cinema, all in service of an audience whose loyalties can switch on a dime.”

Anil Kapoor has shared the few films that he has done for money. The actor says that he will do it again for his family should he ever fall on bad times again.

Anil Kapoor might have casually confirmed that rumoured actor couple, Tiger Shroff and Disha Patani, are dating. Tiger and Disha recently returned from a vacation in the Maldives. Ssumier Pasricha: It’s frustrating that casting directors feel I can only do comedy or play Pammi Aunty