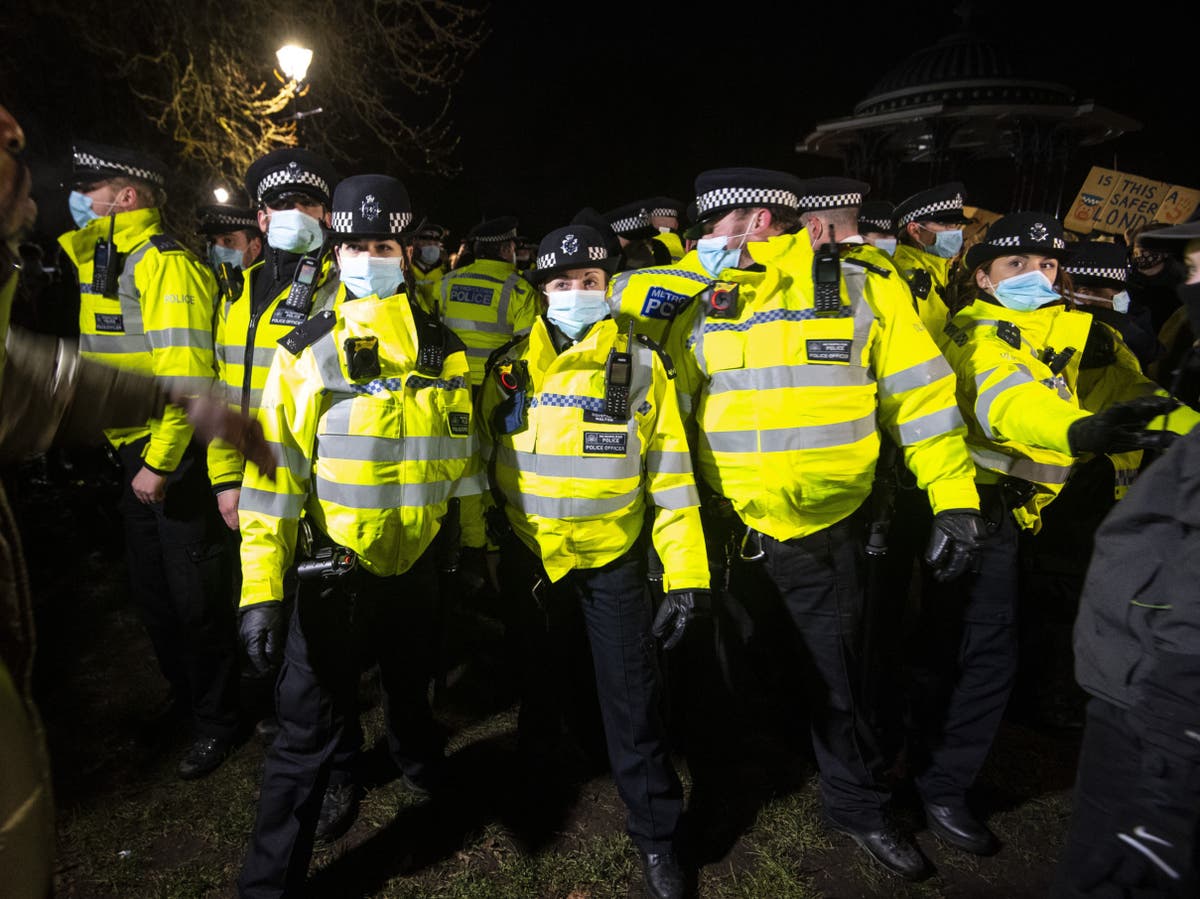 
Claims by the policing watchdog that officers did nothing wrong in responding to the Sarah Everard vigil show “institutional sexism running through the force”, the organisers of the event have said.

A review by Her Majesty’s Inspectorate of Constabulary released on Tuesday found the Metropolitan Police “did not act inappropriately or in a heavy-handed manner” at the vigil and that the force was “justified” in its approach.

The findings, which saw the watchdog accused of “bias” becasue of its reliance on ex-police officers, came despite widespread criticism of policing of the event, with distressing images of women being manhandled and pinned to the floor by police going around the world.

The vigil was called to commemorate Sarah Everard, a 33-year old south Londoner who went missing earlier this month. A serving police officer has been arrested and charged with her murder.

Reclaim the Streets, which had originally organised the gathering, said the watchdog’s report showed clear “disregard for us as women organisers” and did not reflect the reality on the ground.

And Liberal Democrat leader Ed Davey, who earlier this month called for Met chief Cressida Dick to resign, said she and the Home Secretary Priti Patel had put officers in an “impossible position” and that it was wrong to try and stop the vigil going ahead.

“We all saw the appalling scenes at the Clapham Common vigil. Police officers were ordered to manhandle and arrest women, just for exercising their rights to peaceful assembly,” Mr Davey said.

“In the circumstances, we simply do not agree that the Met was right to treat this vigil as if it was just any other large gathering during the pandemic, and therefore to try to stop it going ahead.

“This was a peaceful vigil to mark the death of Sarah Everard. Women rightly wanted to show their sorrow for her death, and their anger that too many women are killed by too many men.”

He added: “We are enormously grateful to police officers on the frontline, putting themselves in harm’s way to keep us all safe.

“It is the Home Secretary and the Met Commissioner who are to blame for putting officers in an impossible position when the decision was taken not to allow the planned vigil to go ahead peacefully and in a Covid-safe way. The right to peaceful assembly and protest is a fundamental human right.”

Organisers Reclaim These Streets said the watchdog’s report was “disappointing” and said despite been interviewed for over 10 hours its findings did not reflect what they had seen on the ground.

“The Met Police antagonistic actions around the vigil forced us to cancel the event, which then in turn, caused a greater number of people to attend due to their publicity,” the group said in a statement.

“We warned the Met Police on Friday night, that forcing us to cancel would cause additional risk to public safety, as did Lambeth Council. They completely dismissed our warning and concerns.

“The report also shows a failure from the Home Secretary and Policing Minister on providing a political steer for the police on this event. They agreed with the NPCC to provide a statement, but failed to so – meaning senior officers, who according to the report fail to demonstrate an understanding of Human Rights law. Where police officers are faced with making finely-balanced decisions in difficult circumstances, it is essential that the law is clear.

“It is incumbent on the legislature to provide a set of rules that is (first) readily capable of being accurately interpreted and applied and (second) likely to attract a high degree of public acceptance and consent.”

The group added: “Instead of taking responsibility for their actions, The Metropolitan Police is standing behind claims that we were inexperienced organisers, despite some of us being elected officials and others having a decade long track record of working with police and councils on events. We anticipated a fair and balanced inquiry and are instead being told not to believe what we saw and heard reported two weeks ago. This inquiry is not representative of our experience with senior Met officials.

“The HMIC had a responsibility to begin rebuilding the trust between women and girls across the capital and the Metropolitan Police. The disregard for us as women organisers in the report is clear there is still institutional sexism running through the force.”

Baroness Jenny Jones, a Green Party peer who previously sat on the Metropolitan Police authority, said the watchdog had a “natural bias” towards the police.

“We all saw the footage and we all saw the police treating women extremely badly at a vigil for a woman allegedly murdered by a police officer. It was the worst possible way to handle that whole protest,” she told The Independent.

She added: “Part of the problem is that they use a fair number of ex-police officers for their investigation. Of course you need some police officers because you need to understand how the Met or any police force works, but at the same time you’re going to get a natural bias towards the police from those investigations.

“I think that’s inappropriate and somehow they just don’t take a tough line with the Met and so I think they’re not fulfilling their function properly. “

But Ken Marsh, chairman of the Metropolitan Police Federation, said the outcome of the watchdog’s review was “no surprise” and hit out at what he called “armchair critics”.

Mr Marsh added that criticism of the police by politicians was “outrageous behaviour from those who should know better”, adding: “We said on the very evening that politicians of all parties should make themselves aware of all the facts before rushing to judgment and making statements.

“But these armchair critics on their Saturday night sofas did not. The knee-jerk commentary from politicians of all parties – who as the report states were reacting to a snapshot on social media rather than the facts – has made the already difficult job of our colleagues in London incredibly harder. And more dangerous. And for that these people should be ashamed.”

Mayor of London Sadiq Khan, said he “completely” understood why “women, girls and allies wanted to hold a vigil to remember Sarah at Clapham Common” and “show solidarity with all women who have been subjected to violence at the hands of men”.

He added that it was “my job to stand up on behalf of Londoners and ensure that there is effective scrutiny of the Metropolitan Police – particularly in the light of such widespread public dismay”.

The review by Her Majesty’s Inspectorate of Constabulary and Fire & Rescue Services (HMICFRS) found officers did their best to peacefully disperse the crowd, remained calm and professional when subjected to abuse and did not act inappropriately or in a heavy-handed manner.

HMICFRS found it was unrealistic to hold a Covid-safe event on Clapham Common in light of the numbers of people who would attend and the short time available, and said the force was right to conclude the health risks of holding a vigil were too great.

However, it said there was insufficient communication between police commanders about changing events on the ground.

“Officers are our fellow citizens, invested by the community to keep the community safe,” said Sir Thomas Winsor, the Chief Inspector of Constabulary who led the review.

They rely upon and are entitled to receive public support when they act lawfully, sensitively and proportionately; in this case, in the face of severe provocation and in very difficult circumstances, they did just that.”

The report said public confidence in the Met had suffered as a result of the vigil and suggested “a more conciliatory response after the event might have served the Met’s interests better”.

Speaking on Tuesday Labour leader Keir Starmer said: “We must never lose sight of why people came to Clapham – and to many places across the country that night – not only to draw attention to the horrendous killing of Sarah Everard and the grief, but also to make the wider point that many, many women and girls feel that they are harassed and abused on almost a daily basis in public and in the street.

He added that he was “very happy to work with the commissioner and anybody else to build that confidence in the police with our women and girls”.

Matt Parr, Her Majesty’s Inspector of Constabulary, who led the inspection team, said: “Amidst a heightened public debate on women’s safety, and during an unprecedented pandemic, the Metropolitan Police faced a complex and sensitive policing challenge at Clapham Common.

“Condemnation of the Met’s actions within mere hours of the vigil – including from people in positions of responsibility – was unwarranted, showed a lack of respect for public servants facing a complex situation, and undermined public confidence in policing based on very limited evidence.

“After reviewing a huge body of evidence – rather than a snapshot on social media – we found that there are some things the Met could have done better, but we saw nothing to suggest police officers acted in anything but a measured and proportionate way in challenging circumstances.” 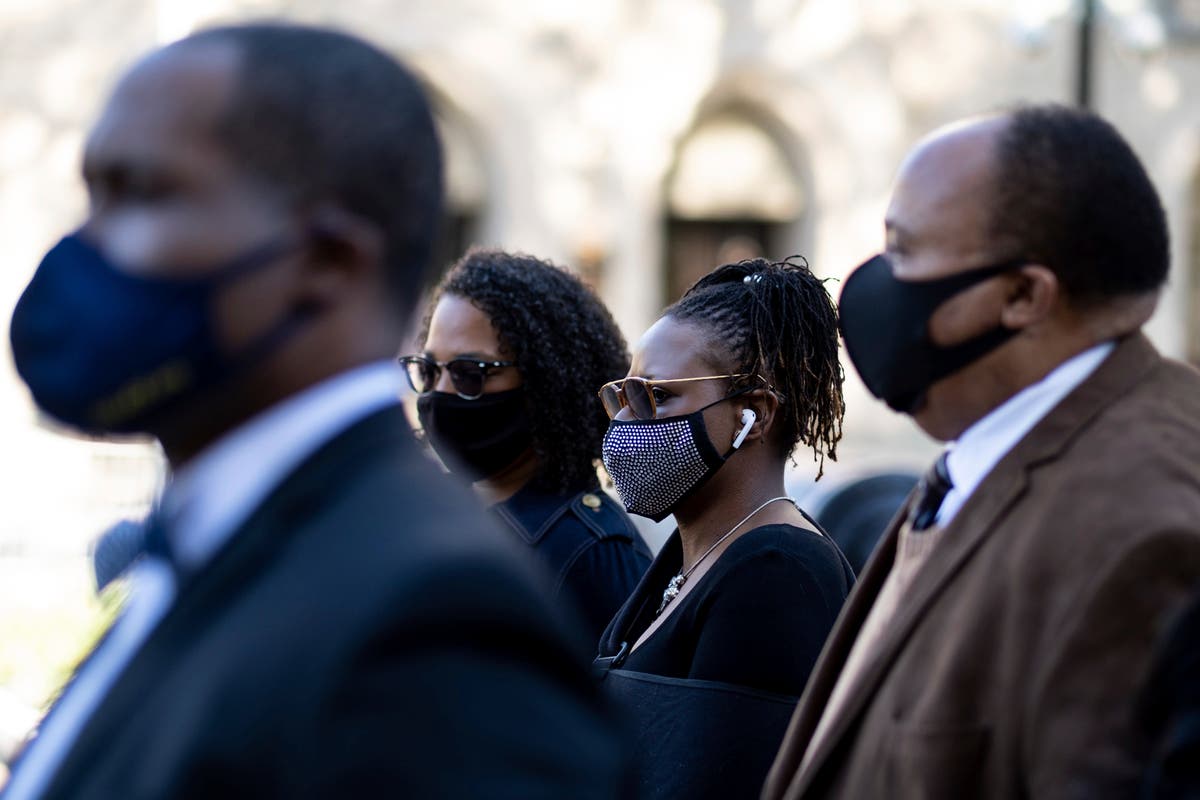 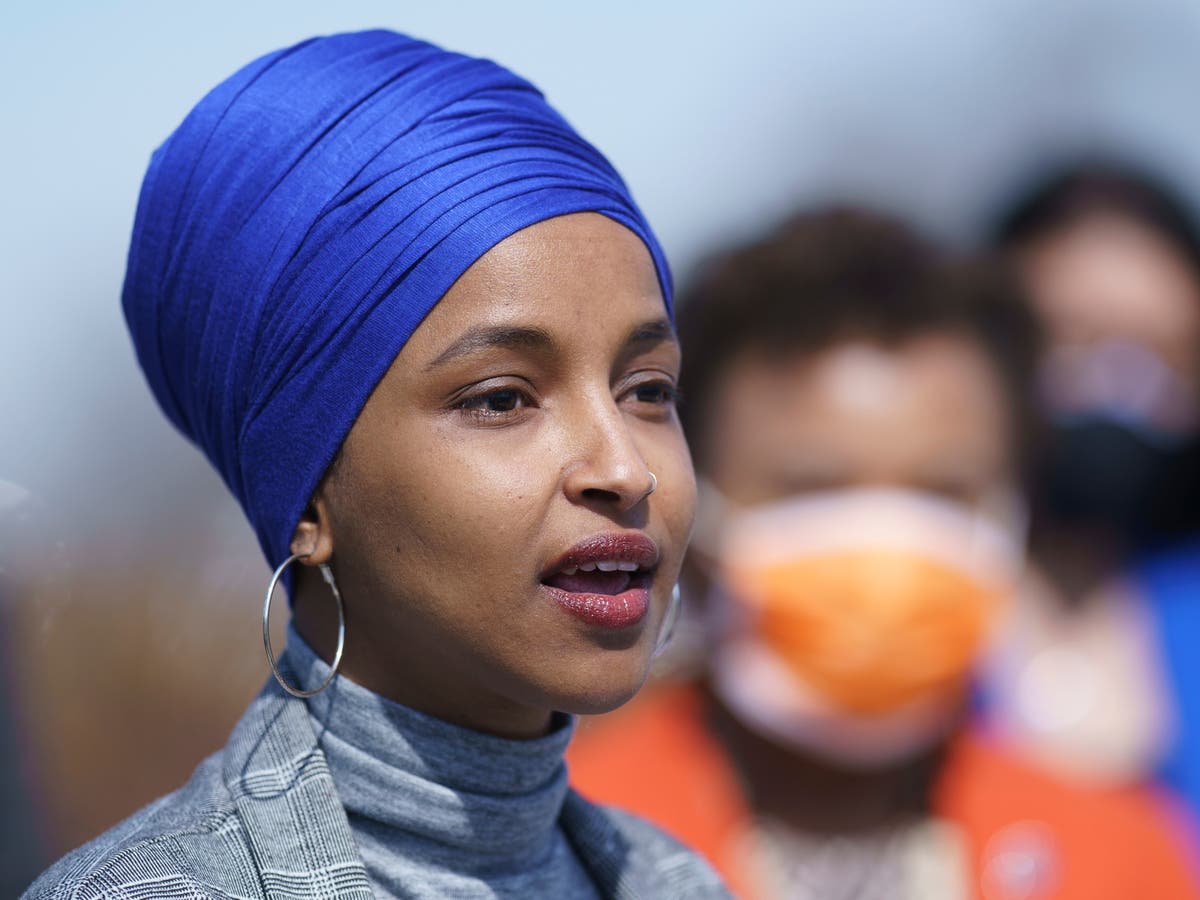 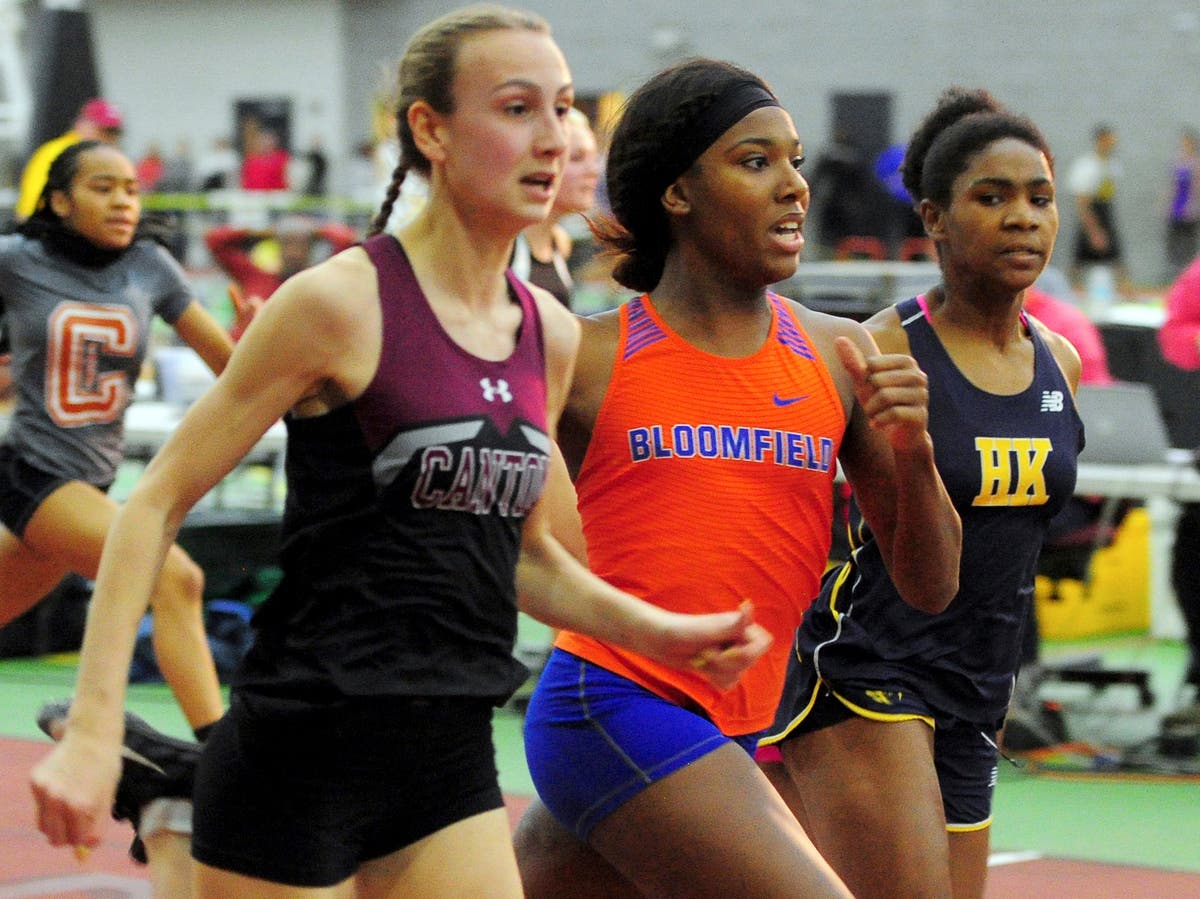 Which US states have banned transwomen from women’s sports teams, and why? – » –