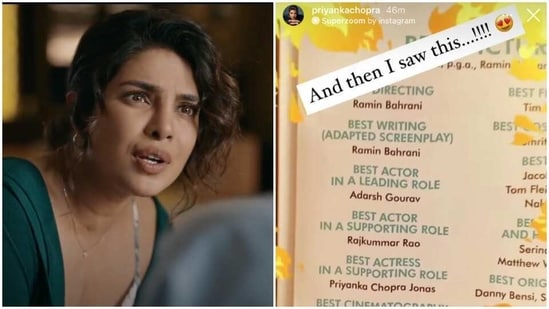 Priyanka Chopra has shared a ‘For Your Consideration’ leaflet (sent to various film awards groups) by The White Tiger team. It championed her in the Best Supporting Actress category.

Actor Priyanka Chopra is excited about her upcoming Netflix movie, The White Tiger. On Wednesday, she took to Instagram to share pictures and videos of the screener package she had received for the movie.

The film’s lead, Adarsh Gourav, was championed for the Best Actor in a Leading Role category while Divine and others were asked to be considered in the Best Original Song category for their song, Jungle Mantra. Director Ramin Bahrani and multiple others’ names have also been submitted in different categories.

Sharing the leaflet on Instagram Stories, Priyanka added by fire effects and wrote, “And then I saw this!!” Adarsh, too, reposted her video on his Instagram page. Rajkummar, meanwhile, shared a picture of a large billboard, bearing the film’s poster in New York City.

The White Tiger opened to largely positive reviews last week. It released in select theatres in the US and will start streaming on Netflix on January 22. Based on the Man Booker Prize-winning novel by the same name, it is being called among the few frontrunners this awards season.

Also read: Did you know Aamir Khan used to write Shweta Bachchan Nanda a letter for her birthday every year?

Priyanka also celebrated the success of her other film, We Can Be Heroes, on Instagram. The film has once again gained the number 1 spot on Netflix. Directed by Robert Rodriguez, the film starred Priyanka in a negative role. The actress was attacked for returning her marriage proposal

[১] The cinema hall is opening after 211 days, there is no account of the loss with the exhibitors’ association